I have created a new blog just for the Milan – Taranto that I and the old man are in this July (actually, in a week!).

Check it out at…..
www.milan-taranto.com

I have today been advised the MV arrived in Italy and is due to be inspected sometime this week which will be great. Hopefully nothing wrong and it will clear Italian customs without a hitch.

My old man will be in Italy tomorrow week so it has worked out to be very good timing.

Today is the last day of study for me with my final exam ever (I hope) at uni tomorrow at 9am. Its on Torts law and I am so sick and tired of studying. Wish me luck!

The bike left in its crate today bound for Italy.

Its one of the final steps of a project that has turned out to be a little larger than I thought it was going to be – however, its al a learning experience.

Anyway – here are some pics of the bike in the crate.

I expect it to actually leave on the ship next Saturday with a transit time to Italy of about 40 days which should give us a few weeks of the bike in italy with out me there which is very decent indeed.

One of the things I did to get the bike into Italy is to get a Carnet de Passage. My only concern is that when they get it in Italy no one will know what the heck to do with a bike arriving on a carnet de Passage and procede to make life uncomfortable for me in getting the bloody thing out of customs – fingures crossed.

Well the long weekend showed that the MV is reliable enough to take part in the MI-TA.

The 250km trip from the Southwest back to Perth went without a hitch (save for loosing a foot peg rubber somewhere around Bunbury). All up now I have put arpound 700km on it over the last month and all if

The bike went well, no oil usgage, no funny noises (save for tapets that are now in need or re-adjustment) and not a single hickup.

So, in a couple of weeks, assuming all goes well the bike will be packed into a crate and shipped off to Italy. The trip is comming together! 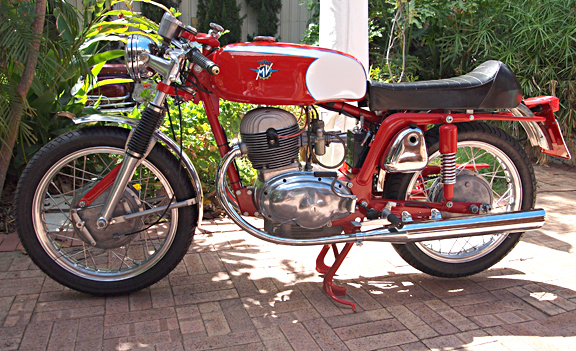 I picked up the freshly painted tank on Saturday, its looks really really nice and promptly installed the fuel taps to then mount on the bike, fill with fuel and take for its maiden ride – it didn’t happen quite as expected.

Having fitted the fuel taps I thought it prudent to fill the tank a little with fuel, swish it about and then empty again to get rid of any bits and pieces that may have found there way into the tank, I was shocked to see flakes of grey paint flowing out when I tipped the tank up-side-down.

It would appear that the cleaver chap that chemically stripped the tank thought it a great idea to not only spray the outside of the tank but to also stick a bit of paint inside then role it around inside to ensure it doesn’t rust – he shouldn’t have gone to so much effort. Its obvious his thought process didn’t include “This is a fuel tank, I should not put paint that gets stripped with flurocarbons inside”. Dim wit.

What a complete mess, after trying with a chain to scrap it off and multiple petrol swill-outs its still in there and its going to be a job to get it all out.

We will have to resort to a tank sealer kit I think with the hope that it will form a seal over both the bare metal and the still painted portions of the inside of the tank – my only fear is that the sealer will strip the paint as well causing all sorts of fun. If this fails it may need to be stripped again and repainted – something I don’t want to dwell on too much at this stage.

Wish me luck during the week.

Well after many, many hours of putting it all back together, yesterday I ran the engine for the first time. Its would be very interesting to know how long it has been since this engine last ran, I dare say 20 years. It started in about 4 kicks and ran very well, idling fine and making no strange noises.

Just need to get the tank back from the painter now which should be next weekend then take it for a run – can’t wait!

A few late nights this past week….

Rebuilt the wheels after the rims and hubs were polished. New stainless spokes and nipples (ohh err).

Restored the front and rear brakes (lots of cleaning of aluminium).

More work tomorrow painting nuts and bolts and other stuff.

New pipe and exhausts on there way from Italy. Other parts I expect will be posted to us mid to late next week assuming the supplier provides us with his banking details.

Frame has been stripped and powder coated Red as have most of the bits that would have once been painted Red (expect for the tank which will be painted still).

This week will be placing an order with a spares supplier out of Italy for the bits and pieces needed to finish the project including engine gasket kit and new set of pipes and mufflers.

Engine has been stripped down and appears to have had little use. This I expect was a result of the broken kick start shaft which I have replaced. New Piston rings required due to a broken one but no major damage to the bores.

Engine rebuild to start before Christmas then its full speed ahead once parts arrive to finish, get registered and ride to iron out the bugs before shipping it to Italy.

If something happens and its unable to go to Italy in time I have a back up ride for the MI-TA, it will be a Lamberetta TV175 (S3) that my father has riden in the rally for the last 2 years.

Had to try out wptogo. I plan to use it heavily in next years Milan to Taranto race.

My dad is currently riding across australia with someone who is raising money for st vincents hospital in sydney. Read all about it here

Enjoy the view from my desk at work…..

The other day I picked up the parts from the powder coters that have been coated in Flame Red. Parts include the Frame, triple clamps, upper and lower, chain guard, stand and several other bits and bobs. The guy that did it for me did a fabulous job, the finish is as good as any paint job I have seen, very smooth deep gloss. So now the majority of colour bits are done but I still need to have the tank painted and the rear tail light holder painted.

Have disasembled the wheels and have sourced some new stainless steel spokes which was not a cheap exercise. I have noticed that one of the wheels is painted silver, the other plain aluminium. Should be fun trying to get the paint off the aluminium given it’s not on the out walls of the rim, just the inside bit where the spokes come through. Should take hours – great! I think I’ll get Dad to polish them up including the huge drums so it will be pretty.