I messed about with my phone again tonight – I was bored.

I uninstalled the existing Wallet app and then side loaded another wallet app (in .apk format) from xda-developers.com.  Set market enabler to Verizon and was successfully able to start he app and creat a new Google Paypal card with $10 free.  Now, just need to figure out how to top up the card from Australia 🙁

I have been very interested in Google Wallet since it as announced but very disappointed that the roll out of the product appears to be very very slow with only a couple of devices supported.

Today I had had enough and in an effort to get the thing going for me here in Australia proceeded to do some “work” on my Nexus S that is now running ICS 4.0.4.

Step 1
Get Wallet installed on the phone.
There is a way you can get it on your phone without side loading but geees is it involved and basically requires you to try loading it in the app stpre then somehow foolin the thing to get it by using the web browser. It all a bit long winded but it does work.

Step 2
Unlock the phone.
Using fastboot you must first “unlock” the booloader which has a couple of consequences not lest of which it wipes everything, data on SD card stprage – everything so mack sure you backup your apps and then back up the SD Storage to your PC as after unlocking its all gone. The other consequence is that it factory resets as well so you need to set the phone up again including APN if you are using non standard one.

Step 3
Again using Fastboot flash the TWRP reovery image. Which, among other things allows you to do the next step

Step 4
Install Superuser
Save Superuser to your phones storage and using TWRP while in recovery mode install/run the superuser script.

The issue
To run Google Wallet you have to spook a US mobile carrier, to do this you need Market Enabler but to run market enabler you must root the phone and here is the issue, Google Wallet will not allow you to creat a Google Pre-Paid card using a device that has been rooted.

So there you go kiddies, rooting your phone to take advantage of Market Enabler almost gets you what you want but you are ultimatley thwarted by the fact that you have rooted your phone.

My advise – be patient and wait/see if Google Wallet is released to the massess – till then unless you are living in the USA it may be a waste of time, let along the issues you are likely to face to be able to associate aything but a USA credit card to the prepaid card.

If anyone has a more clever idea which gets around this whole issue let me know.

After I had updated Google Music on my Nexus S and had uploaded music to my Music Beta by Google account I noticed that my Andorid phone failed to “see” the uploaded music.

If you use Google 2 step verification you may have the same problem, this is how I got around the issue.

Let me know if this helps you.

Thanks to a few helpfull soles on the sipdroid site I have been succesful in getting sipdroid to register with my Asterisk server AND be able to make calls.

The trick is (thansk to Adrian)
In your sip.conf, comment out “secret = …”. Instead use the following: auth=username@password@host

I also made a change to the extension sipdroid runs on in asterisk and changed: qualify=no

Sipdroid registers to my asterisk box fine and is able to make and receive calls fine. As for the call quality – well that is another thing – keep in mind my testing to date is over Optus 3G.

The first issue I am having is that if I call someone’s mobile I loose the first say 10 seconds of the conversation, ie, I miss them saying “Hello” which starts the conversation off on a failry bad footing, the person I called is usually first heard by me saying” Hellllloooooo, any body there” or something to that effect – not great. Secondly there is still some lag. This is odd becasue I thought the lag I experienced using pbxes.org would reduce given the server I am regsitering to now is local and not in Japan.

Lastly, you need a very stable and good internet connection. I believe now that my data usage has doubled for calls I make as effectivley my asterisk box uploads and downloads from sipdroid AND it uploads and downloads to my VSP. Given the codec used in sipdroid is G711 data usage is high so keep that in mind – 80kbps up and down times two = 160kbps up and 160kbps down for a phone call.

Anyway, best of luck for anyone deploying sipdroid on their asterisk server. Let me know how you go.

Today I received my new SIM from Exetel. After a slight hitch porting out from my old mobile provider I was up and running in no time.

I got a mate to call me on the DID number that I have assigned to my Pennytel account that is a trunk with my PBXes account that SIPdroid registers with (the hoops i go through). It worked fine with just a few seconds of jitter during the conversation that lasted a few minutes. So, so far so good. We will see how it goes over the next few weeks and see how mad it drives me.

I have spend many hours trying to get my ADP1 phone running Sipdroid to register with my trixbox server. Its driving me nuts, really, it is.

Yes, I have changed the sip_nat.conf file and ensured it has…

I have tried it over WI-Fi on my LAN and over 3G. I was able to reguister OK – once then if fails there after. Strangely it will register only after you creat a new extension for sipdroid in trixbox.

Is it my NAT router doing something odd?

So, do you think I can get it to work. No, I can’t and its driving me NUTS! AHhhhhhhhhhhhh.

I think I’ll just buckle to it all and register with PBXes and then register a VSP as a trunk there and use it that way. Surely it couldn’t be this difficuly but apparently it is. Interestingly on the Sipdroid site it says something to the effect, we are smarter than you and have changed PBXes a little from a standard trixbox installation (obviously) so don’t bother wasting to much time trying to get Sipdroid working with your own asterisk box – it won’t work. This really shits me to be honest. Shouldn’t these kind of things be created to give the maximum amount of interopability.

So who has managed to get Sipdroid register and work with your own Trixbox/Asterisk server? Let me know how you did it – its killing me.

If someone at PBXes reads this – what changes need to be made to my Trixbox to get Sipdroid to work with it, come on guys…..

Great couple of days, rebuilt modem works and now, today, I received my replacement ADP1. Another night of updating and loading of my favourite apps.

Well, actually back to Brightstar it goes.

After a week with me I can stand this fault no longer. The number 7 key is faulty, it doesn’t have the click that all the rest of the keys have and its actually difficult to get any output from pressing the key.

I figured I paid good $$$ for the thing, I may as well have it in 100% working condition so I got an RMA from Brightstar and sent it back today. Perhaps this is a false economy and I should consider the purchase a sunk cost and forget about spending more on it but I just can’t.

I miss it already…..

As you may know my new favourite tooy is the ADP1. I just loaded on wpTOgo so with luck this will work. I actually blogged from my phone. So cool….. 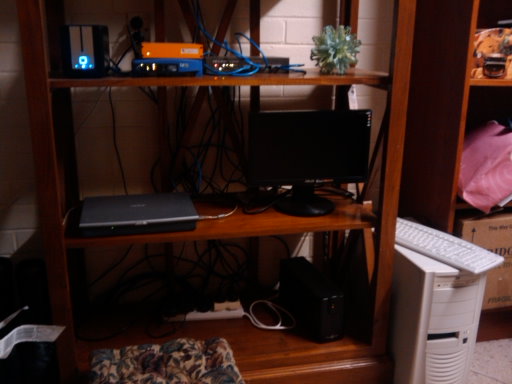 After tracking its progress from the USA to me here in Perth (via Germany, Dubai and Asia) I finally got the phone yesterday at work.

Enabled 3G with my mobile provider and off I went. Sweet machine but I’m worried about data usage on this thing. My provider charges by the MB, I’ll see how it goes for a couple of days then find out the damage. If its worth it I will change to another provider perhaps with a Data package that gives you say 500MB for a fixed amount.

Up till midnight last nigh flashing it with new firmware and radio stack so it is now running Cupcake (1.5).

Might have a play with the ROM’s flying around on the XDA Developers site I see. They look cool.

Have to get the follow apps I think at this stage..
wpTOgo
ConnectBot
Sipdroid